There is a bit more to growing Christmas trees than sticking them in the ground and waiting until Christmas when large number of customers line up at the gate to hand you fists full of cash just because you had the foresight to realise that Christmas was coming. You can do this but chances are the cash won’t be forth coming and the customers will be lining up at someone else’s gate. Here’s the real truth about growing Christmas trees. 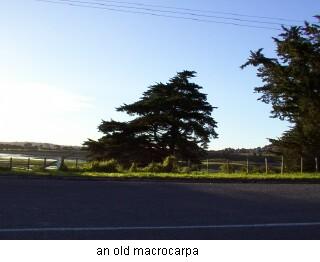 We have selected a number of mother trees from around the area which in our opinion show good Christmas tree characteristics. Some of these trees are far from being handsome specimens but show traits such as multiple branching, good stability in wind, disease and pest resistance and above all an excellence in colour and appearance in late November and December. At the optimum time of the year we gather seed from these trees in preparation for sowing into our nursery seed beds.

In late winter the seed is sown into prepared seed beds. Over the next 12 months the seedlings will be wrenched, and undercut to prepare them for the shock of being moved to new open ground in the following spring. Shortly before being transplanted they will be basal pruned and then topped to encourage multiple branching from an early age. 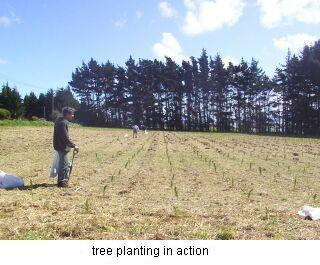 After pre releasing the fields for weeds, the now one year old seedlings are planted out using string lines to ensure they are in straight rows. This will make caring for them over the next three and a half years as convenient and easy as possible. For the first six months, after transplanting, the seedlings appear to sit dormant then with the onset of springs warm weather they slowly start to grow over the summer months then burst into life with the autumn rain. They will grow to an average height of one metre over the next six months. At this stage the real work of shaping and shearing begins. 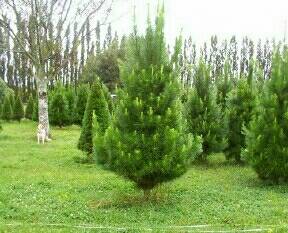 As one of the desirable results of shearing a tree is obviously appearance one of the less desirable effects is its increased susceptibility to disease and insect attack due to all the cut and exposed tips. 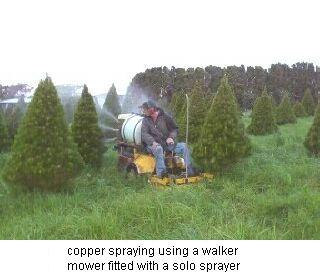 Just as you would clean and dress a wound on a finger the trees also have to be sprayed after each pruning to prevent infection from disease and insects. The rows are weed sprayed once a year to prevent competition during spring with the trees and every four weeks the grass between the rows is mowed. It gives me great delight to tell people that it takes me nine days to mow my lawn. Then in mid November the trees are sprayed once more to evict the spiders and other unwanted insects that can spoil an other wise perfect Christmas. We do however try to keep spraying to a minimum to counter act the damage we create by trimming the trees without taking over natures natural ability to mend itself. 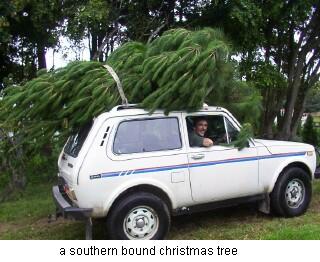 Harvest begins in late November at which stage the real hard work and long hours start. Cutting trees and loading trucks and trailers at all hours of the night, stocking shed and tree lots and serving customers until the sun goes down and drinking lots of cold coffee. But for this you do get well paid and it is good to see the smile on peoples faces whenyou say “have a good Christmas” after they have bought their tree. Probably one of the most rewarding aspects of the Christmas tree business for me is to see customers with their children who once came, with their parents, as children themselves knowing that the tree they buy, which I have watched grow for four years will stand in their lounge over Christmas with many a child’s excited eyes gazing at the mystical presents under it.