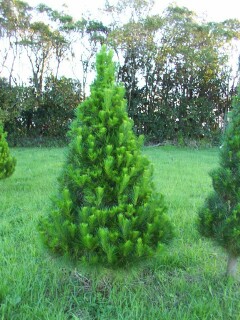 Originating from one of only three location on the American west coast, Monterey, Ano Novia and Guydalupe, this tree was imported to New Zealand as seed in the late 1800s. Although at that time it was regarded as being of little value other than a shelter or nurse tree, eventually established itself as New Zealand’s number one plantation timber tree.

This three needle pine recovers quickly after being trimmed or sheared and develops a mature dark green appearance in its third year. They have excellent needle retention if kept standing in water.

When choosing your radiata Christmas tree you should choose one that has mature growth that cover the cut tips, which have a white appearance if trimmed too late in the season. You should also be wary of a tree that has light green immature growth as these tips wilt soon after cutting and no amount of watering will revive them. 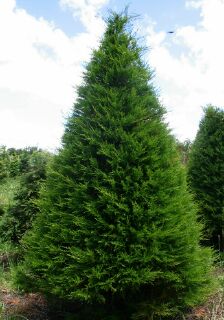 Sometimes called the Monterey cypress the Macrocarpa is a native of America and is often found in mixed forests with Radiata pines. Outside its natural habitat it cross breeds readily with many other cypresses some of which are in cultervar in New Zealand as forestry and as ornamentals.

It has scale like foliage which during the summer season is a fresh medium green. It does not drop its foliage, does not droop and gives off an amazing fruity fragrance. It will last for a very long period after being cut if stood in water. However, the foliage will dry and turn brown if it remains un-watered and becomes dehydrated.